International Migrants Day’s theme: Safe Migration in a World on the Move

Posted on December 17, 2017 by Media about Development

“Migration has always been with us. Climate change, demographics, instability, growing inequalities, and aspirations for a better life, as well as unmet needs in labour markets, mean it is here to stay. The answer is effective international cooperation in managing migration to ensure that its benefits are most widely distributed, and that the human rights of all concerned are properly protected.” These are the words of UN Secretary-General António Guterres ahead of International Migrants Day (December 18). The 2017 theme is: Safe Migration in a World on the Move.

Did you know that at the end of 2015, more than 65 million people worldwide had been forcibly displaced and 86% of them were hosted in developing countries? You can read more information on common myths about refugees in Human development report 2016. The Human Development Report 2016 ’Human Development for Everyone’ looks also into the question: Who has been left behind and why? 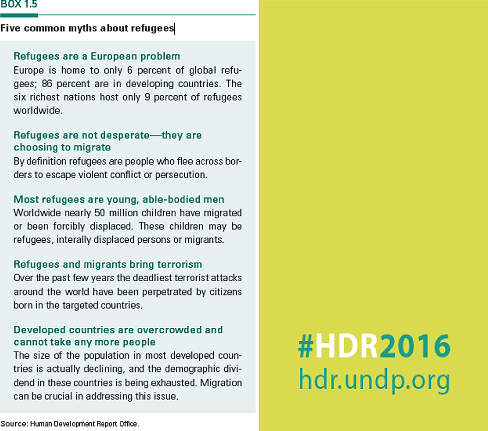