Posted on June 10, 2012 by Media about Development

Today each young man/woman should have a foreign experience. Experience of EVS can make you aware of topics which you’ve been missing in your life. If you get into a good settled and well working organization, you might experience unforgettable satisfaction from what you have done.

Doing EVS really means one of the best investments in your life and lifes of your audience as well. In 2009 I cooperated with hosting organization A.C.T.O.R. Romania and I had great chance to participate six months at EVS-project “InterCOOLtural house” in Bucharest – as youth worker, animator, promoter, workshops leader in schools, social centers and hospitals. This experience has twisted completely my view on non-governmental sector and changed my future vision into the mission.

During my gender-workshop for teenagers from high schools in May and June we made a lot of activities with one goal: to understand how different is position of men and women in Romanian and European society (presented by media). In one of private high schools, called Cronos we tried to make together list of examples of positive/negative discrimination in our lives. Students mentioned womens’ problems with finding job, unequal salaries for women, high number of men in politics and manager’s positions etc. We discussed also about presidential election in some European countries.

During the most active and practical activity I wanted to receive feedback from students of particular school (Cronos private high school). I tried to connect gender studies with media communication. On examples of articles and photos in Romanian tabloid magazines they showed very clear media presentation of men and women in our society. In two groups young people should prepare “message from our world to other civilization”.

They made posters (simple montage by cutting magazines and gluing chosen parts on flipcharts) covered by photos, headlines, parts of articles from magazines. We discussed about the result of this activity – about media wrong picture of men and women in society.

I have found couple of nice personalities in this group of students, who understood the topic of workshop and tried to find solutions – how to change this bad situation in Romania. We were able to discuss about tabu-topics and face the stereotypes in religious country like Romania. I hope that this first contact with gender-topic moved their thinking to right direction.

Workshops in primary schools and kindergartens

During spring and summer I went several times to make a GarbArt workshop with children from private kindergarten ABCDino (one of my favorite kindergartens in Bucharest). At the beginning of workshop we used to speak with kids about simple examples of recycling process, also about different materials from garbage – in English and Romanian language (as I usually did in other kindergartens). We used to try to create something very nice and artistic from recycled materials (cut to small pieces), what we brought to kindergarten from our houses. Girls wanted to make flowers from old issues of newspaper, trees from plastic bottles and straws. Boys wanted to make animals out of cartons, castles out of juice boxes.

Kids used to call me Profesoara engleza (English teacher), but it wasn’t the funniest thing I have heard/seen during my GarbArt workshops. Last time in august we made roses from many types of paper. I asked girls in Romanian language: “Pentru cine sunt aceste flori?” (For who are these flowers?) Small Cristina answered me very quickly: “Pentru Michael Jackson!” Andrea and other kids started to shout the same sentence. I tried to explain them, that Jacko is already dead. But everything was decided. Finally, we made the whole hour extraordinary flowers from paper garbage – just for Michael Jackson. He was probably laughing a lot in music-heaven during our workshop.

The results of GarbArt workshop @ one of Romanian primary schools. (Photo: A.C.T.O.R. Romania)

So Why to be an EVS-volunteer?

It’s a known fact about me that I am big fan of university formal education. Yes, I am on good way – how to finish my fourth university study. But to be honest I have to say that what you can absorb during five years of university study in your home country, you could also absorb well during half-year of doing European voluntary service (EVS) somewhere abroad.

Each EVS-volunteer have been attacked by this type of question: „Why you are volunteer? You should better earn money!“ Yes, that could be truth, but EVS is not about earning money! You still have enough time to earn a lot during rest of your life (next thirty years).

During EVS you will mostly prove your self-reliance, improve your skills, meet a lot of new people, speak many foreign languages, live in international environment, discover traditions, habits, positive and negative sides of hosting country. Furthermore every time and everywhere you can present your country in positive/real light to the others, destroy communication barriers and face the stereotypes, learn a lot from different cultures. This is the main advantage of this personal development activity because that exactly EVS is. Finally the main reason (why people do this “job” from three to twelve months) is – to help somebody, who needs your help or support; to teach some people something new in area, where are missing money for hire real workers (and pay them adequate salaries).

This is not just fun (never-ending party with new friends in foreign country). Even if you “only” play with children in hospital, social center or kindergarten few hours per day, it’s serious job and each volunteer has to be focused on his/her work. Because then it’s no sense to do something without focusing on it, without motivated preparation about it, and finally without feed-back from target group. EVS is not the same as few days long youth exchange and few weeks long work-camp. It’s complete packet of Youth in Action activities with qualitative background: for courageous people, who could be later strong personalities and inspiring leaders of youth organizations, for sure. 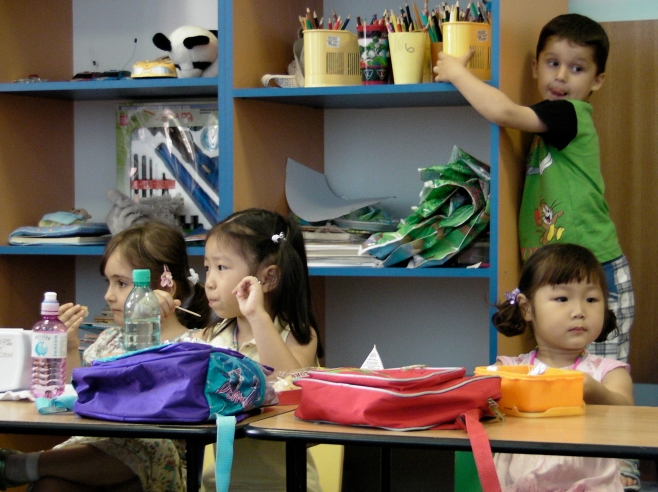 Planning the future – connected to Youth in Action program

During last decade I have spent 44 semesters at universities – learning and teaching various courses (from environmental mineralogy, intercultural approach, gender and development studies, radio journalism to documentary movie making). After all this university education I felt a bit disappointed, so I spontaneously jumped into non-formal approach of education. I tried to change the situation around me – I tried to fight with prejudices and stereotypes through workshops at universities and high schools in Romania (during my EVS-stay there).

When I came back home (to Slovakia from Romania) after my EVS-stay in 2009 nobody was interested in the meaning of voluntarism, nobody in state institutions wanted to use or share my experiences in front of youth audience. I felt so frustrated and I almost gave up my activism, voluntarism and belief in Youth in action program. But I didn’t do it and two years later I became a trainer for Youth in Action projects for Slovak National agency. I am everyday focused on non-formal, anti-biased, global and also development education.
One year ago I discovered non-violent and intercultural communication, which can avoid the discrimination of certain people or groups of citizens in our society.

In 2011 I built brand new NGO in Slovakia: DocUnion, which is focused on projects of media-presentation and audio-visual production – to face the society-problems (social exclusion, discrimination, gender stereotypes etc.) – through non-formal education, especially the multi-media projects & documentary movies. Because I am teacher, youth-worker, but also journalist & documentary movie maker I would like to continue in motivating and couching young people through personal development trainings or intercultural workshops. What mostly supports me is this visible feedback from my co-workers, participants and Slovak young adults. I am planning to continue in voluntarism and share my experiences among you.